In the long run:
A cultural history of Broadway's hit plays 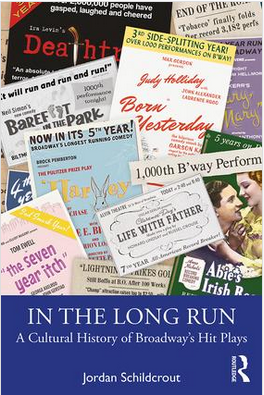 by Jordan Schildcrout
In the Long Run: A Cultural History of Broadway’s Hit Plays presents in-depth analysis of 15 plays that ran over 1,000 performances, examining what made each so popular in its time—and then, in many cases, fall into obscurity.

Covering 100 years of theatre history, the book also traces the long-running Broadway play as a distinct cultural phenomenon that rises and falls from 1918 to 2018. Each chapter focuses on the longest-running plays of a particular decade, synthesizing historical research and dramaturgical analysis to explain how these plays function as works of theatrical art, cultural commodities, and reflections of the values, conflicts, and fantasies of their times.

In examining “the long run” both in relation to particular plays and the larger history of Broadway, In the Long Run explores the nature of time in this ephemeral art form, the tensions between commerce and art, between popularity and prestige, and the changing position of the Broadway play within American popular culture.

Purchase for $22.50
"Jordan Schildcrout has eye-opening surprises for us
in his marvelous new book In the Long Run"
Peter Filichia, Masterworks Broadway

"It's a fantastic read and would make an excellent gift
to a theatre lover. I cannot recommend it highly enough."
Matt Tamanini, Broadway Radio

includes chapters on these long-running hits