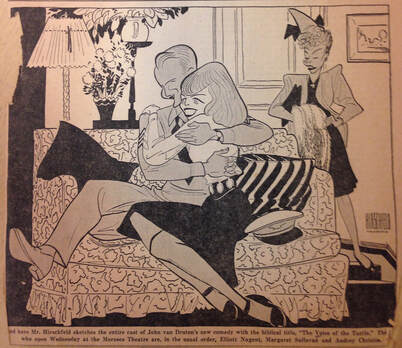 The Voice of the Turtle, then, can satisfy people who might hold very different attitudes about love and sex. It’s possible to understand Sally as a young woman who wins love despite her affairs, or as a young woman who wins love through an affair. Ultimately, the play maintains a moral ambiguity, so the audience can see Sally’s affairs as a problem, or they can see her belief that they’re a problem as the problem. In either case, Bill helps her overcome her regrets about the past and her fear of the future, and the play affirms that Sally is still a “marriageable” young woman.

Moral watchdogs, however, had no use for such ambiguities surrounding the subject of non-marital sex. Monsignor John L. Belford of the Roman Catholic Church of the Nativity in Brooklyn wrote to the police commissioner, asking him to investigate a play that he considered “rotten and indicative of immoral trends in the theatre.” The Rev. Daniel A. Lord, S.J., who hadn’t seen the play but read Van Druten’s short story version in Collier’s, said of Voice of the Turtle, “It is gay; it is witty—and it is immoral as hell.”

Richard Coe of the Washington Post, in an article titled “The Vice of the Turtle,” accused the play of duplicity, wrapping up its sexual immorality in sweetness. A columnist for the New York Daily News attempted to find some middle ground, acknowledging that the play “is an immoral little thing,” but assuring the reader that “it is a hit not because of its sinfulness, but because it is expert polished theatre.”