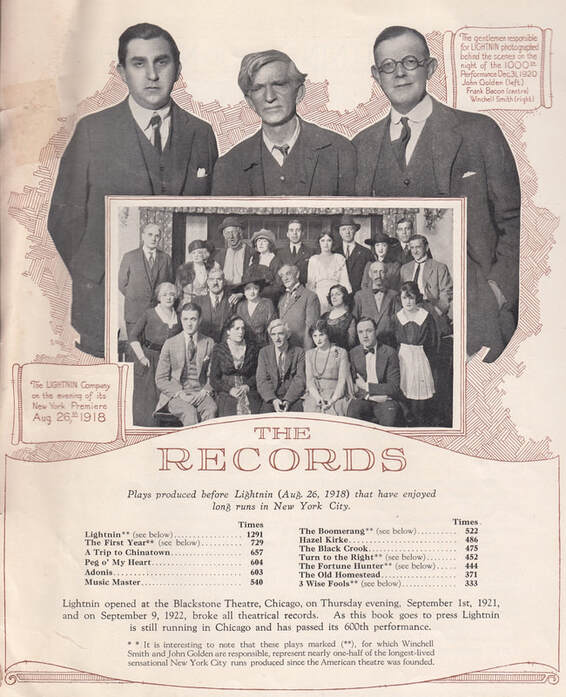 When Lightnin’ played the last of its 1,291 performances at the Gaiety Theatre on Saturday, August 27, 1921, President Warren G. Harding sent a letter, which was read from the stage by his Secretary of Labor, James J. Davis. Harding congratulated the play on its “record-breaking run,” fondly remembered his own pleasure in seeing the play, and extolled the virtues of “an American play of the very highest type, by an American author, presented by American actors.” According to producer John Golden, Lightnin’ could have continued playing on Broadway to strong box office, but he couldn’t get out of his contract with A.L. Erlanger, the producer at the Blackstone Theatre in Chicago.

So on Monday, August 29, 1921, the entire company of Lightnin’ participated in a parade that carried them from the Gaiety Theatre to Pennsylvania Station, where they boarded a train to Chicago. New York City Mayor John F. Hylan joined the producer John Golden, the director and co-author Winchell Smith, and the co-author and beloved star Frank Bacon in leading the parade, which included an estimated 5,000 celebrants from the New York theatre community, brought together by the Actors’ Equity Association and theatrical professional clubs such as the Lambs, the Players, and the Friars. Some reports claimed that 100,000 spectators turned out for the event. Lightnin’ was the biggest hit Broadway had ever seen, and this extraordinary parade can be understood not just as a celebration of this one play, but of Broadway itself.