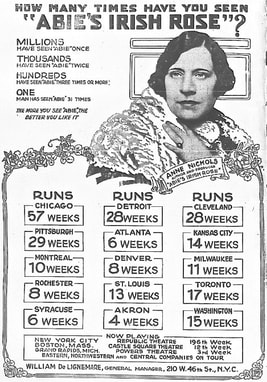 Anne Nichols was persistent. Oliver Morosco had produced her play Abie’s Irish Rose in Los Angeles, where it ran for an impressive 44 weeks, but he, along with every other producer who read it, declined to back it on Broadway. In a historic case of chutzpah, Nichols decided to produce the play herself at the Fulton Theatre in 1922, mortgaging her home and pawning jewels in order to raise the $5,000 production costs. When the show suffered mixed reviews and poor attendance, she offered cut-rate tickets and took a loan of $30,000 from the “firm” of gangster Arnold Rothstein to keep the show running.

Nichols would not give up, and her sentimental comedy about a Jewish boy who marries an Irish-Catholic girl, much to the consternation of their comically bigoted fathers, eventually became a hit, running for an unprecedented five and a half years and 2,327 performances. By the time it closed in 1927, Abie had been seen—on Broadway, on the road, and abroad—by an audience of 11,000,000. Nichols’s play was a hit with “the people,” but for the critics who dismissed or disparaged it, Abie’s phenomenally long run prompted an existential crisis over questions of art, taste, and commerce in the American theatre.
In the Long Run
cited in New York Times article
on the 100th anniversary
of Abie's Irish Rose